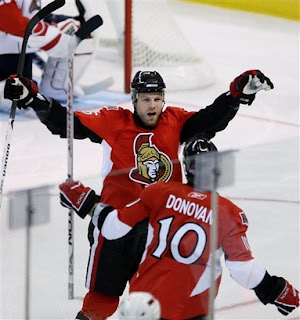 Out of all the columns written on the Senators 3 day getaway, Ken Warren does the best job describing the atmoshphere around the team and gives us some insight into how veterans and younger guys relate to each other on an NHL team.

"While Spezza says some of the club's younger players do spend time together during the down time between games in Ottawa, the veterans often go their separate ways when the games and practices are over.
"It was nice, because usually when we're on the road, we fly home right after games," Spezza said. "Some of the guys who have wives and families, they also got a chance to just sit around and shoot the breeze. It's nice just to get together and do nothing, really. It's good to mess around like this. And whenever you get a chance to play a little pond hockey at this time of year, it's welcome."

Plus we get the scoop on Brian McGrattan's star turn on the scrimmage ice playing on a line with Dany Heatley and Jason Spezza ("Alfie's spot might be in jeopardy now" joked Gratts) and his big haul on the water with the rod and reel.
I've said it before and I'll say it again - guys like McGrattan are essential to a team, not just for his fists but for his popularity in the locker room. All talk of trading McGrattan should be scrapped. This guy's a keeper.
Posted by Jeremy Milks at 10:41 AM