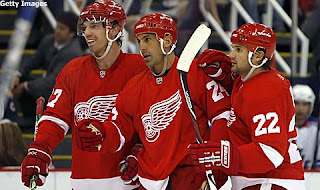 As Stevenson notes, Volchenkov already has 25 blocked shots in 4 games and is only 3 saves behind Martin Brodeur. Stevenson also points out that the Sens only gave the Devils one power play after giving up 20 in the first three games. That's a sure sign that they have their skating legs back.
TSN Hockey host James Duthie has a blog going on over at the Citizen and it's filled with his usual goofy schtick. Pretty good actually. He claims that he looks like "Bea Arthur" in High Definition broadcasts. If you don't know who Bea Arthur is then ... well, it's hard to explain.
Chris Chelios last night played in his 1,550th game and got a goal to show for it. He is now in 8th place all time in games played after passing former Red Wing great Alex Delvecchio. Dude is 45 years old. Insane. He's kind of turning into the Rolling Stones of NHL hockey. Both Chelios and Mick Jagger are work-out fanatics. Not sure about Keith Richards on that point.
Bob Duff of the Windsor Star pens a real interesting article here about how the CHL is being affected because NHL teams are keeping junior-eligible players on their rosters to save money against the salary cap. The London Knights right now are without three players who made the NHL: Patrick Kane of the Blackhawks, Sam Gagner of the Oilers and Steve Mason of the Bluejackets. The London Knights are a brutal 0-6 right now.
The Caps are unbeaten. Wow.
Posted by Jeremy Milks at 9:52 AM