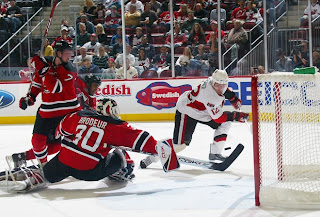 Just another day at Sens practice during a stretch where the defending Eastern Conference champions have played only twice in 17 days. No word on whether Gary Bettman has brought this issue up with the crew of monkeys on Percocet who actually draft the schedule.

Ray Emery took a shot off the mask from Patrick Eaves and didn't take too kindly to it. According to Bruce Garrioch of the Ottawa Sun, the team kept their shots low for the rest of practice after Emery looked like he wanted to bury Eaves at centre ice. (Emery probably looked extra scary because he just recently shaved his dome).

Then Dany Heatley hooked Chris Neil during a drill and Neiler got in Heaters face. By all accounts, Heater's best buddy Brian McGrattan didn't like that turn of events and let Neil know about it. To top it all off, Chris Neil had to wear a ladies frilly pink hat after losing the Sens practice game of Juice Boy. If the rules are still consistent, Neil would have also had to serve juice to the thirsty lads in the dressing room after practice. 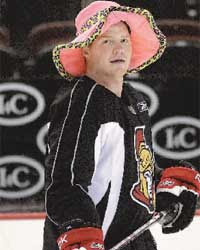 No one seems to be concerned about the in-fighting, claiming it's all just due to the long layoff, and as assistant coach Ron Low told Garrioch, "Familiarity breeds contempt, even against your own teammates."

The 9-1 Sens also have some business to take care of when Dean McAmmond's shoulder is strong enough to play. It looks like rookie Nick Foligno is the one who's going down to Bingo when that happens, but according to Allen Panzeri of the Citizen, he's willing to go down there if that's what the team decides. He played the fewest minutes on the team against New Jersey on Saturday and Randy Robitaille, who just signed with the team, has looked pretty good so far, further pushing Foligno towards the Bingo bus.

Regardless of this, nobody's heard the last of Foligno for this season. One injury on the team and he'll be back.

Speaking of Bingo, baby faced defenseman Brian Lee is playing pretty well, tied with the plodding AHL warhorse Denis Hamel for the team lead in scoring and racking over 20 minutes a game.

It also looks like Jason Spezza might have hurt his groin and nobody really knows if he'll play against Atlanta on Thursday.