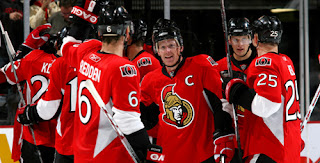 The whole Dany Heatley contract situation has turned exactly into what Heatley claims he didn’t want – a mindblowing crisis. Reports by TSN say that the two sides are only 1 million apart but both are agreed on a six year term. If that’s the case, Bryan Murray should just sign him and get this monkey off of the Senators back before it turns into a raging 600 pound gorrilla bent on destruction.

No one really believes that this contract story will go away if Heatley doesn’t sign by tonight, despite Heatley’s claim that it will be time to “concentrate on hockey”. Until this thing gets resolved, it will be the proverbial elephant in the dressing room except this time the elephant is taking a massive dump on the Senators logo in the middle of the carpet and Bruce Garrioch and his media counterparts won’t be able to shovel fast enough.

Now, onto the game at hand.

No one seems to know for sure yet but it seems like Christoph Schubert will indeed be playing defense with Joe Corvo as his partner. This is a break from yesterday’s news that Schubert would be playing on the fourth line. That’s because there’s speculation Josh Hennessy will be ready to come back from a shoulder injury in time to step onto the ice at the Air Canada Centre. What kind of game Hennessy could provide the Sens is questionable due to his rather limp and flaccid performance during training camp. Schubert on the other hand looked like a Boston Bruin from their heyday in the 70’s when he was put on the frontline. If coach John Paddock is so concerned about the play of Luke Richardson that he’s willing to put Hennessy into game action, then this team might need some trade help pretty fast.

A guy like Luke Richardson was brought in to help in the dressing room but he’s still effective on the ice as a punishing down low defender. Sometimes it takes the old guys a few games to get going properly so it’s my opinion that Paddock should just throw him in there with Corvo and let him get going. Corvo can provide all the speed that’s necessary and that way we won’t have to watch Hennessy mope around the ice like he did all September. That dude was brutal despite having probably the best chance coming in to grab the spot now occupied by Nick Foligno.

The line to really watch tonight will be the Mike Fisher, Patrick Eaves and Foligno line. We already know what the other combinations can do but both Foligno and Eaves had phenomenal camps. Fisher is coming off an injury so it bears watching how he reacts as well.

On the Leafs side, it will interesting to see how Pavel Kubina is playing after apparently getting his head together during the summer. Look for Jason Blake to be a real catalyst for this team, taking over the role that Darcy Tucker had some limited success with last year.

Of course, the goalies lie at the crux of the whole damn thing. Martin Gerber still hasn’t convinced me that he can actually control a rebound and not collapse under the pressure of a meaningful game. And on the Leafs side, who the hell knows who or how they’re going to play.
-
Post Script:
-
Mike Milbury was very good on the TSN season preview show last night. Milbury held his own with a couple of media heavyweights (Pierre McGuire, Bob Mackenzie) and a bitter and nasty know-it-all mouthpiece (Glen Healey).
-
Sportsnet is really struggling right now with their awful studio makeover to "Connected" where the annoying hosts wear jeans and say things like "slobberknocker" to describe homeruns (oh how hip of you Sportsnet!) and a hockey panel that are clearly inferior to TSN. Nick Kypreos freaking out because the AHL decided to honour the Steve Downie suspension was ridiculous. Remember the trade deadline show last year and all the pundits were eating pizza on air and they had the "mysterious" Eklund tossing out false trade rumours from the shadows of the studio? Effing brutal to watch. Any channel that promotes "Ultimate Fighting" as much as they do can't be worth much anyways.
-
Brian Burke is still pissed at Kevin Lowe and I don't blame him one bit. In fact, all the other GM's should be just as outraged because Thomas Vanek's contract is going to affect them all this summer when they try to sign guys. Burke likened it to a "grenade" which is quite the accurate analogy. K Lowe has a lot of young players coming up. Good luck trying to fend off the offer sheets.
Posted by Jeremy Milks at 10:57 AM