The Thrashers Are Falling Apart 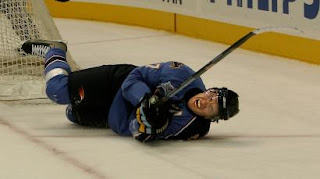 Prospects for the Thrash are bleak right now, really bleak. They are 0-4 after losing 6-0 to the Sabres last night and have been outscored 17-4 through 4 games.
"Oh, it gets worse. Your new Thrashers enforcer? Ilya Kovalchuk.
After Toni Lydman flatted Todd White, Kovalchuk jumped to White's defense. The scrum became a fight between Kovalchuk and Drew Stafford, and that should never happen. Somewhere up high in the radio booth, Jeff Odgers must have been dying to jump out there to Kovalchuk's defense. Ultimately, nobody did.
"When you have guys like Kovalchuk, who is our game-breaking scorer, fighting, you know things aren't going well," said defenseman Garnet Exelby."
Posted by Jeremy Milks at 1:22 PM