Jordin Tootoo Is A Diver And A No-Good Punk 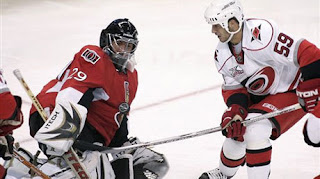 What Jordin Tootoo did in last night’s Phoenix-Nashville game was a disgrace.

Tootoo took a major run at Phoenix forward Daniel Winnik, leaving his position at the blueline and almost taking Winnik’s head off with a hard shoulder. The search and destroy hit took place near the end of the game when the Predators were already losing 6-3. As for the hit itself, it is technically legal because Winnik had the puck at the time and should have had his head up. What is clear is that Tootoo, just like Steve Downey, purposefully charged across an entire zone to try and hurt another player. Okay fine.

Here’s the real disgrace. Tootoo takes a rather tepid clothesline from Craig Weller who instinctively tried to look after his injured teammate but when you watch the replay, Weller barely got his arm into Tootoo’s chest yet Tootoo falls to the ice and lies there as if he just received an elbow to the face. Some say the arm hit Tootoo's nose but it barely grazes it on the way by. Anyways, the trainers come out but there’s nothing for them to do because Tootoo was clearly just milking it for a penalty. He skated off just fine and went into the hallway for a moment, probably to laugh his ass off.

What is even worse is that Tootoo was the one complaining after the game. It was clear he tried to injure Winnik but here he was crying to the media about an injury that is non-existent.
“Tootoo appeared OK after the game, but would not directly address his physical status.
"Obviously I will leave it up to you guys to say how I feel," Tootoo said. "There was no possible way of me defending myself." ”
This is clearly just another player who “doesn’t get it”. He has no respect for his fellow union members nor for the game itself. He’s known around the league as a cheap-shot artist and someday, somewhere, this dude will get his clock cleaned and nobody will be complaining about the aftermath.

Hurricanes 5 Senators 3
The Sens are no longer perfect in loss column and no longer perfect in penalty killing as well.
What is very clear from last night’s game is that the Hurricanes were raring to go and the Senators were just trying to survive the game. Perhaps John Paddock can now rethink his strategy of playing his top two lines to the point of exhaustion. Last night he was forced to play the fourth line only because the first three were struggling. If it goes on like this all year, the top tier players on this team are going to be dragging their asses into the playoffs. When Dean McAmmond returns from his concussion, the fourth line should solidify into something that Paddock feels he can use.
Shean Donovan finally got some quality minutes last night instead of riding the pine with Brian McGrattan. In fact, McGrattan himself played a hell of a game. Paddock should take a cue from Anaheim and play his tough guys more than a minute a game. At least they bring energy and lessens the stress on the other players playing huge minutes.
As for Carolina, they looked like a club with something major to prove. Eric Cole in particular was back to form and Cam Ward was a major difference.
In other news, Ray Emery was sent down to Bingo to get in a couple of conditioning games. I wonder if he took the white hummer?
Posted by Jeremy Milks at 10:30 AM