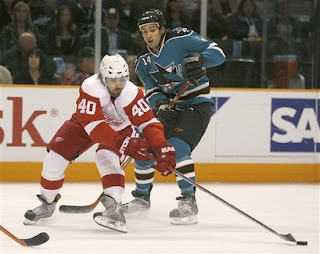 According to TSN, the Wings were rebuffed by Gary Bettman in their proposal (supported by Toronto and Vancouver) to have an 84 game schedule that would allow teams to play a home and away series with each out-of-conference team.
The real smart idea here is that this proposal would cap pre-season games at 6. This pre-season reduction would be a boon to both fans and players. Some teams play as much as 9 games before they start counting and the fans and players loathe these games which only seem to benefit players on the bubble of the 23 man roster.
Drop the pre-season games and tack them onto the regular season, allowing us the chance to see every team in the league. Sounds like a winner to me.
But with the new guy in the NHLPA, and Bettman's reluctance to broach the subject, who knows where this will ultimately go?