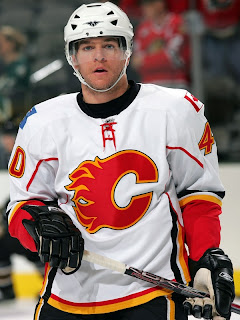 There is sudden speculation that the Flames and the Habs were on the verge of completing a deal that would see Alex Tanguay and Alex Kovalev swapped. Kovalev of course, played for Iron Mike in New York and was young enough to still be collecting those little troll figurines with the colourful hair which he kept piled in his locker.
But according to the Calgary Sun, the still goalless Tanguay is in no mood to waive his no-trade clause to be dumped into the high-pressure chamber of the Habs locker room.

"I'm not planning on wasting any time on that at all," he said. "I'm here with the Flames, and I think when they brought me here they wanted me to help the team, and as far as I know, it's still the plan."
"I'm very happy where I'm at. Who wouldn't want to be playing on a line with Jarome Iginla and Craig Conroy and on a team that's got Miikka Kiprusoff in net?"

Here's one thing that's for sure: If Iron Mike decides to make Tanguay's life a living hell for not waiving the clause, Tanguay will be begging to put on a Hab's jersey by January.
Speaking of the Habs, they will be in town tonight for a tilt against the Sens and Carey Price will be getting his 2nd start of the season. The Sens go with Gerber and it looks as if Randy Robitaille will make his debut in a Sens uniform on a line with Patrick Eaves and Mike Fisher.
P.S. If you want to see Alexei Yashin getting into a pathetic scrap over in Russia, then click here comrade.
Posted by Jeremy Milks at 12:23 PM