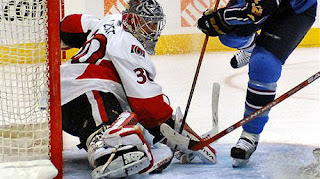 John Paddock told Chris Stevenson after the game that the reason he started rookie Brian Elliott, 22, and not Martin Gerber was because the Sens had played badly in Atlanta in the recent past and wanted the team to focus.

It paid off huge. Even captain Alfie said, "Smart move. The coach looks like a genius."

Elliott was fantastic throughout the game, especially in the third period, and even managed to contain his rebounds, something which the very lucky-so-far Gerber has been unable to master.
If this Elliott kid is the real deal, and by all accounts he is, then the Sens have never had such depth in goal. It is even conceivable that the Sens could trade Gerber and not demand another backup in return because Elliott looks that good. Seeing as Gerber might be worth something finally, the Sens may be able to pry a good forward prospect for him instead of just giving him away. That scenario is unlikely however as I’m sure the team wants Elliott to be playing huge minutes down in Bingo and not riding the bench in Kanata.

The big line was held off (on Atlanta television, the announcers were calling them the Pizza line and even had their side reporter explain the meaning behind the moniker, saying “Up in Canada they have a pizza franchise called ‘Pizza Pizza’….) but they were stymied more by Kari Lehtonen than by ineffective play. Dany Heatley had some good chances but couldn’t bury it and Jason Spezza was very effective carrying the puck last night. Alfie was his usual self and showed a real physical edge as well, giving Ilya Kovalchuk a real good bump before Anton Volchenkov gave the puck away to Kovie for Atlanta’s only goal. Alfie also gave Bobby Holik a spirited shove behind the net which led to the night’s only mob scene.

The Atlanta announcers were adamant that last night was the best game the Thrashers had played all season. I thought Lehtonen played really well despite looking sluggish in his movements. Everybody knows that Lehtonen has major fitness issues (ie: the dude is lazy and fat) but he’s so skilled that he’s able to overcome that when his groin isn’t hindering him. Kovalchuk looked like the leader on that team despite Holik wearing the “C”. The look on Bob Hartley’s face after the Senators third goal was of someone trying to mask sheer panic in a season that could go quickly down the tubes. The Thrash are 0-3 and no one has a hotter seat than Hartley.

Jesse Boulerice of the Philadelphia Flyers delivered a brutal cross-check to the face of Canuck Ryan Kesler last night. If Colin Campbell has any balls left, you send this guy home for 20 games like his goon teammate Steve Downie. Even Boulerice’s own coach was disgusted by his player.

"It"s unacceptable, it's something that we can't have," Flyers coach John Stevens said of the hit "We didn't need to get involved in anything really, we had the hockey game in hand and that was the message on the bench, so that kind of stuff can't happen."