Hossa Hurts His Groin - Out For Tonight 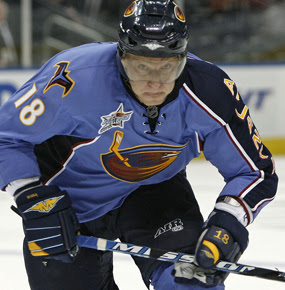 Hossa got a skate caught in that terrible Atlanta ice and hurt his groin, leaving him doubtful for tonight's tilt against the Sens.
Atlanta could be in real trouble. Jeff Schultz is wondering where the effort is for these blue birds. Winless so far and people are already getting the bucket ready so coach Bob Hartley can kick it. They got one for Don Waddell not far behind.
"Bobby Holik described the team’s play as “pathetic.” (Tact has never been his strong suit.) Asked if there are any problems relating to message or communication between players or coaches, Holik said: “That’s a fair question. But after two and a half percent of our games — and I know you don’t want to wait for 10 percent of the games because then it could be too late — it’s a little too early for deep analysis.”
Posted by Jeremy Milks at 12:17 PM