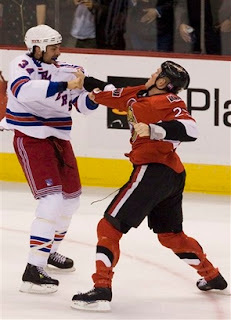 Bruce Garrioch pens an article saying that Chris Neil is not worried about the New York Rangers trying to take revenge for his hit on Sean Avery last weekend. The Sens and Rangers play tonight without Avery, who has a separated shoulder, but expect Rangers tough guy Colton Orr to be in the lineup. Neiler says he can take care of himself, thank you very much.
Here's the lineups and game notes for tonight's game.
Garrioch also makes it clear that the Sens won't be opening the season in Prague, Czech Republic against the Penguins. The Sens didn't decline but the NHL went in a different direction, probably with Tampa Bay.
It also seems that the Sens are in talks with hometown boy Randy Robitaille to come and add depth at center. This dude has already played for 9 freaking NHL teams in just under 500 games, scoring 74 goals and 227 points. His best NHL season was with the Minnesota Wild in 2005-06 where he had 40 points in 67 games. He once scored 102 points back in 98-99 when he was with the AHL Providence Bruins. Even if he doesn't stick with the club (or even clear waivers upon signing, which very likely will be the case here), the Senators will have added even more depth at the pro level just in case the Philadelphia Flyers decide to behead any more of their players.
If you like this sort of thing, Chris Stevenson plays a round of golf with Alfie and gives the play-by-play throughout. They also talk a little hockey where Alfie reveals that he never had as much fun in hockey than last year playing for Bryan Murray.
Speaking of coaches, John Paddock let fly another dandy to the press, calling his club's loss to the Carolina Hurricanes a result of his team being "brain dead". Nice.

I don't often stray from the hockey talk here, but I have to rub it in a little. Our fine Mayor, Mr. Larry O'Brien, is going down in flames in a mind blowing scandal that is now crawling its slimy way into the Prime Ministers living room.
This O'Brien guy deserves every bit of this after stomping on our city's plan to build a light-rail transit system along with his partner in crime, John Baird. This guy wanted power so bad he was willing to bribe another candidate out of the race and with his federal Conservative buddies, get him a nice appointment on the parole board. These right-wing nutters always find a way to blow themselves up. I love it.
Posted by Jeremy Milks at 8:26 AM