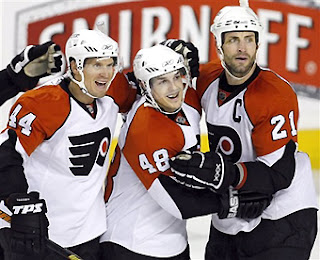 Daniel Briere is now officially known as Danny Briere, that according to the Atlanta play-by-play men last night. Apparently the word came down from the Flyers public relations department and this article attests to that as he is called Danny throughout. It might just be that those blue collar Philly fans, the ones who routinely boo Santa Claus and the Easter Bunny, may find that a French-Canadian name like Daniel a bit too similar to Danielle. Poor Danny is starting behind the 8-ball in this regard because he looks no older than 12 years old.
You can just see the Philly headlines already after Briere led wins - "O' Danny Boy!"
In other news, the reorganizing of the Blackhawks continues with Bob Pulford being sent to the woodshed in what the Hawks are calling a "re-assignment". Basically, Rocky Wirtz, team chairman, is trying to shovel out of the pile of shit that the franchise had become under his father Bill. Next up - Hawks games on TV. It's a revolution brothers and sisters.
Posted by Jeremy Milks at 3:25 PM