Havlat's Shoulder Is Toast ... And The Rest Of The NHL Wrapup. 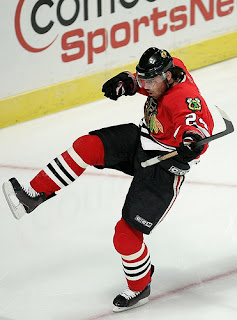 Unbelievably, Martin Havlat hurt his shoulder again last night. It’s the same shoulder he had surgery on in 2005 with Ottawa and last year with Chicago. The cameras actually caught Havlat collapsing in the hallway to the dressing room after hurting the shoulder in a harmless looking scrum against the Wild. I don’t want to state the obvious here, but it looks like Havlat might never be able to put it all together. It wasn’t that long ago that Havlat was tearing it up for the Senators despite having to live in the shadows of players like Daniel Alfredsson and Marian Hossa. Things haven’t gone well in Chicago. Pierre McGuire noted on the Team 1200 here in Ottawa just a week ago that there were concerns in the Chicago locker room because Havlat and Robert Lang were hanging out together and avoiding the rest of the team. It seems some of the other Hawks got their backs up about it which doesn’t bode well for any kind of chemistry the Hawks will surely need.

Vincent Lecavalier looks to be in good form early and don’t count him out for another Rocket Richard trophy although Dany Heatley and Alex Ovechkin will have something to say about that. Looks like Vaclav Prospal is due for another big season. He always alternates between lousy and very good. Last year was a lousy one. Those new darker Lightning uniforms look pretty sharp on the ice as well.

Speaking of uniforms, has anyone noticed how much the new Florida away sweaters look exactly like the Flyers when seen on television? I actually thought I was watching Philly vs New York for a couple of minutes until Olli Jokinen had the puck and I thought: Wow, Paul Holmgren really did revamp this team. Even though the Panthers didn’t look that great last night, they’ll make the playoffs this year.

Wade Redden is back folks. He snagged two assists and was feisty all night. He probably has a burr under his saddle after media reports stated that he’s as good as gone this summer due to Heatley and Fisher signing big deals. Here’s something for Bryan Murray to think about: You can’t win a Stanley Cup without an elite puck moving defenseman. But here’s the question – is Wade Redden still an elite D-man?

I don’t know where John Paddock is coming from on this but he is really only using two lines so far this season and has completely abandoned playing his fourth. This might be due to Dean McAmmond being missing but it’s getting a little much, especially when the Sens are in the midst of a 4 games in six days meat grinder. It might help in the short term to double shift Alfie and Heater but what about down the road in April. Do you really want a bruised and battered Alfie trying to start a Cup run playing 26 freaking minutes a night? Chris Neil got a whopping total of 7:43 of ice time and Shean Donovan only saw 8:28. Brian McGrattan saw less than a minute of ice. Brutal.

Congratulations to Greg Millen of Hockey Night In Canada for another marathon of aimless and completely obvious commentary. At least he didn’t go into a tirade about the officials calling too many penalties. Maybe someone talked to him and Ron Maclean because they were both mum on their favourite pet peeve. If these two dudes ran the game, we’d be watching a rodeo on ice.

Martin Gerber again looked good but don’t let that deceive you. His rebound control was a mess again last night and this will always remain his fatal flaw. As Pierre McGuire said on the Team 1200 this morning, Gerber is a very good “initial puckstopper” but it’s like his pads are made of India rubber.

The Sens will have to stop getting penalties if they're going to survive the Rangers and Jaromir Jagr on Saturday.
Posted by Jeremy Milks at 10:51 AM