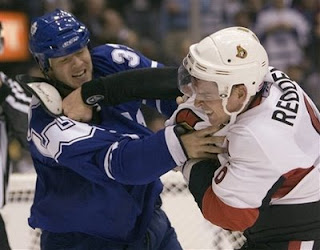 So Dany Heatley gets a six-year contract and then pumps two goals by Andrew Raycroft, including the overtime winner. Quite the night for the player who has probably made Glen Fry rich three times over in song royalties because every time he scores in Ottawa they crank out “The Heat Is On”.

More importantly, the Sens are looking solid down the road because they’ve got almost their entire core under contract for many years down the road.

That leaves Jason Spezza and perhaps Wade Redden as the main guys the Sens will be targeting for further contracts. Chris Stevenson of the Ottawa Sun seems to think that the Heatley signing is the end of Redden’s career in Ottawa but I’m not so sure. If Martin Gerber continues to play well, the Sens will surely be able to rid themselves of his contract through a trade. Joe Corvo may also be moved to accommodate Redden’s salary because Brian Lee will soon be able to take over his minutes, as early as next season.

Chris Kelly will be an unrestricted free agent at the end of this season and surely Bryan Murray would like to sign this guy, but he might have to be sacrificed. If either of Ilya Zubov or Alex Nikulin work out, that would allow Fisher to assume Kelly’s spot on the third line instead of being forced into an offensive role that he’s not really suited to.

On to the game last night:

First off, Spezza was horrific. It looked like he was trying to play shinny to impress his family who no doubt were watching in Spezza’s hometown rink last night in Toronto. He gave the puck away over and over again trying to stickhandle through the whole opposition and was kept at the margins for most of the game. Coach John Paddock is gonna have to get out the paddle for Spezza if he doesn’t show some maturity here in what was supposed to be his breakout season.

Alfie was his usual self, if a little rusty. Redden finally woke up after a two year coma and got into two scraps in which he held his own, despite getting cut by his own helmet in the second one. Gerber was solid but not unbelievable as some are claiming. He let in two goals that he should have had but overall, not bad for opening night. Andre Meszaros continued to struggle in his own end defensively but showed some great offensive patience setting Heatley up for the tying goal in the third. I’d much rather see Christoph Schubert paired with Redden but that’s why Paddock is a successful coach and I write a blog. Meszaros is still young and will improve in his own end eventually. Did you notice that Mesz is growing his hair out again? Maybe it’s superstition because he had long locks in his rookie season and the guy was lights out. He cuts it off last year and falls off the charts. If this works, the nickname “Samson” is just screaming out for this guy.

Nick Foligno didn’t see much ice but had at least one good shift. I’m not sure if Josh Hennessy actually saw any more than 2 shifts the entire night. I’m still not sure why Paddock chose to dress Hennessy over Luke Richardson. Even if Richardson only plays 2 shifts a period, that would give Paddock the option of moving up Schubert from time to time to play forward when the team needs somebody to give them a physical edge.

If Richardson is going to be leader in the dressing room, he has to get some games in to earn his teammates respect. Plus, Ottawa can use Richardson’s size down low where he’s still very useful if the pre-season is any gauge.

Overall, a middling effort by the Sens who only won when they decided to crank it up in the third. That strategy might work against a very shallow Leafs team but it won’t work against many others. Look for a better Jason Spezza tonight during the re-match because Ottawa fans will start bringing out the baskets of raspberries if Spezza starts turning over the puck like he did last night.
Posted by Jeremy Milks at 11:16 AM