Solution Is Easy: Emery Is The Man - Local Fishwrap Oct. 16 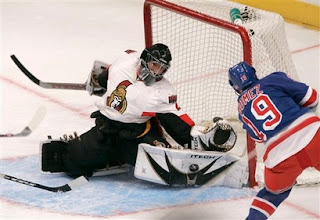 Goaltending controversies always bore me and the one now currently "raging" in Bytown is no exception. The Sun and the Citizen churn out equally uninsightful articles on the subject and we can expect more of the same for the rest of the week at least while the Sens go into the NHL's version of purgatory where they play 3 games in two years.
To me it's a simple exercise. Ray Emery earned the right to the starting job by being the first goalie to take the team to the Stanley Cup final. Just because he's injured and Martin Gerber has regained his form doesn't lessen Emery's worth one iota. Emery is a world class goalie with superb athleticism and a strong mental approach. All these worries about off-ice incidents is way overblown in a very low-key city.
Gerber has been good, in fact spectacular against the New York Rangers on Saturday, but he has not proven anything in his career. Some great games in October should not fuel controversy over Ray Emery's status with the team. If I'm John Paddock, I throw Emery in the net right away. If I'm GM Bryan Murray, I get on the phone and try to deal Gerber's salary to a team like the Los Angeles Kings who desperately need a number one goalie. The difference is that L.A. is trying to just make the playoffs. Gerber can help them. Ottawa is trying to win the Stanley Cup. Emery can help Ottawa do that more than Gerber.
For a guy who has barely played four years in the league, Gerber is certainly getting accolades that far outweigh his accomplishments.
Don Brennan of the Sun does a nice piece on Luke Richardson, emphasizing the veteran's mammoth scrap with the Rangers Brandon Dubinsky where Richardson cranked the rookie with a heavy right hand to the grill. Dubinsky could barely stand afterwards.

""I guess that's what you get for picking on the old guy. You learn the hard way."
Dubinsky asked Richardson for the fight, obviously hoping to give a restless crowd something to cheer about. The next words he would utter would be "I'm okay, I'm okay" as he staggered from wall-to-wall down the corridor heading to the Rangers' dressing room. "

Brennan also notes that when Gerber threw the puck down the ice with his glove during Saturdays tilt with the Rangers, he almost hit Chris Phillips in the dome. If he had connected, that would have been the second time Gerber had hurt Phillips. Anyone remember last season when Gerber came over to the bench and accidentally slammed down his goal stick on Phillip's finger? Sportscasters were laughing about that one for weeks.