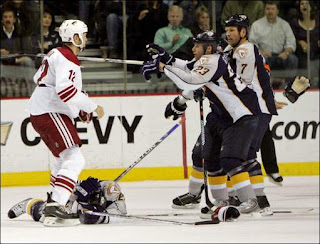 Someone else is backing up my contention that Jordin Tootoo made a mockery of the game last night by trying to run Coyote Danile Winnik and then faking an injury after Craig Weller gave him a softie clothesline.

Ryan Dixon over at the Hockey News tells it like it is here:

"The transgressions of Steve Downie and Jesse Boulerice have been well documented, but the most recent reckless act was actually a near miss last night in Nashville. Noted Predators disturber Jordin Tootoo almost connected on a hit that, if completed, would have looked disturbingly similar to the one Downie laid on Ottawa’s Dean McAmmond.

Phoenix center Daniel Winnik was fighting off a Nashville defender while carrying the puck in the offensive zone and just as he was emerging from behind the net (sound familiar?), Tootoo tore in from his defensive post on the wing, hit the afterburners at the faceoff circle and attempted to knock Winnik six rows deep.

But recognizing Tootoo’s intent, Phoenix tough guy Craig Weller went after Tootoo with some nasty intentions of his own. Weller whacked Tootoo with a forearm to the face, Tootoo hit the ice, Weller dropped his gloves but quickly realized that if he was going to throw punches they were probably better directed at the swarm of Predators coming after him than the one who was dazed on the ice.

Weller, appropriately, was given a match penalty for intent to injure. Tootoo, who received no penalty, called his check on Winnik a “nice clean hit.” "