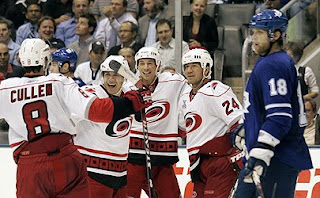 In case you've been living under a rock, the world's most important team, the Toronto Maple Leafs, drove off a cliff and exploded into flames during a 7-1 beating at the hands of the resurgent Carolina Hurricanes.
Vesa Toskala was in net for all 7 goals but that didn't stop the Sportsnet team of analysts from claiming Toskala was the best Leaf of the night. In for particular shame is Bryan McCabe who is now the "Larry Murphy" raspberry flavour of the month. Not only was he being booed, but he was laughed at when he ran into his own net, collapsed, and gave up the puck for a scoring chance.
It's always fun to watch the Toronto media perform a rip job so here are some of the best of today in that category:
"Rock bottom, and with Halloween still three weeks away." Damien Cox takes a little off the elbow in The Star.
Mike Zeisberger uses phrases like "embarrassing stinker" and "disgraceful effort" while ripping his fresh hole.
Even plain old Bill Lankhof gets a little nasty.
And check out this Sportsnet forum where Leaf fans painfully dissect the minutiae of their agony.
Posted by Jeremy Milks at 11:48 AM