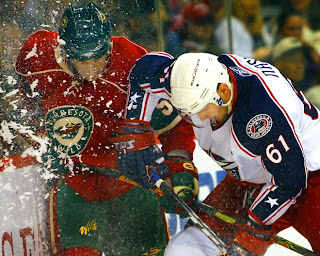 Love them or hate them, something interesting always seems to happen when they play. They might get run out of the joint and score on themselves in overtime or they crank up the offense and rack 6 goals on the scoreboard. The only thing Toronto is missing to make it a true circus is a pest/enforcer type like Tie Domi or the way Darcy Tucker used to be.

Most Boring Team To Watch: Vancouver Canucks
What a joke this team has become. Alain Vigneault forces them to dump the puck in the offensive zone which essentially neuters his best players and then lines his whole team up on the blueline. On top of that, Roberto Luongo is so obviously wearing if not illegal, then clearly over sized equipment, including a pair of shoulder pads that rival Garth Snow's circa 2001. How the NHL lets these pampered and spoiled goalies get away with this crap is beyond me. Poor Luongo even claimed he'd retire if the NHL made the nets bigger. Probably because his scrawny frame couldn't withstand the further mountain of equipment required if that happened.
Honourable Mentions: Columbus Blue Jackets, Dallas Stars, Florida Panthers

Most Surprising Team: Columbus Blue Jackets
It may not be pretty to watch but Ken Hitchcock has the Jackets right in the pocket of the West by virtually eliminating a thing we used to call goal scoring. The only thing used less than the nets in Ohio is Jody Shelley.
Honourable Mentions: Boston Bruins, Chicago Blackhawks, Minnesota Wild

Most Disappointing Team: Atlanta Thrashers
This one's obvious but it was a hard choice between them and Anaheim. Atlanta essentially decided to quit on Bob Hartley, which is exactly what is happening over in San Jose. Anaheim is still reaching for the Aspirin after a summer long champagne bender.
Honourable Mentions: Anaheim Ducks, San Jose Sharks, Nashville Predators

Most Predictable Situation: Players Hate The New Uniforms
The new sweaters repel the sweat right into the player's gloves and skates. Now Reebok is secretly trying to fix them and offering the older materials to players who request it. What a boondoggle.
Honourable Mentions: Vancouver Can't Score, Dustin Penner Isn't Performing, Phoenix Still Blows Big Time.