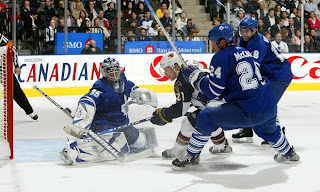 Steve Simmons may be the most obnoxious hockey columnist working in the business today. He doesn't do much better on television when he's a panelist on the Canadian version of the Reporters with host Dave Hodge. Just seeing this dude speak kind of makes you want to take a shower. He's overly nasty and humorless and is the king of the knee-jerk opinion. He's the Toronto hockey media equivalent of Bill O'Reilly.
But sometimes he's right as this article might suggest. Except for the part where he names Glen Healey as a possible replacement for John Ferguson Jr. Healey actually surpasses Simmons in downright ugliness. (Just a side note: Bill O'Reilly is never right. Ever.)
On another note: Bruce Garrioch points out that since being off since, forever, the Sens still only play 2 games in 8 days. Who the hell made this schedule anyways? Bill O'Reilly?
Hugh Adami breaks down the Peter Forsberg to Ottawa rumours and comes up with the conclusion that it might just not be worth it, due both to the Sens being near the cap (Forsberg wants a 3 year deal at 5 bills) and Forsberg being a "walking Medical dictionary". Adami also mindlessly manages to throw another jab at Ray Emery, deeming him possibly expendable due to the play of Martin Gerber. What is it with the media in this town? Nobody seems to have any respect for Emery despite him leading the team to the Cup final. It's bordering on being a media putsch to get Rayzer out of town. Brutal.
--
And yo, what up with the Preds? I had a ton of these dudes in my pool and now I'm sucking dirty pond water at the bottom because Alex Radulov has disappeared again. It would be a shame to see Barry Trotz get canned because of this. They need Steve Sullivan and Shea Weber back soon or the shit is really going to hit the fans (as if they aren't getting covered in shit enough already)
Posted by Jeremy Milks at 11:09 AM