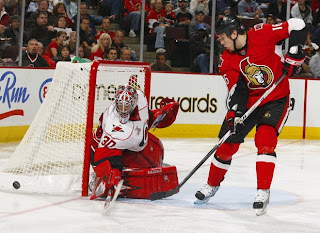 Unfortunately, Ottawa Senators coach John Paddock is becoming "one of those guys", and by saying that I mean a coach who gets some sort of weird satisfaction by not telling the media (and by extension, the fans) who will be the starting goaltender for the next game. Seriously, this is just aggravating and useless.
And it's not like the fans desperately need to know who's going to start, it's just that once you keep it away from them, it turns into a sort of cat and mouse game that never seems to end.
"Asked yesterday if he knows who will start, Senators coach John Paddock deadpanned: "I do."
Why bother holding press conferences at all if it's just a chance for a coach to withhold information? Paul Maurice does the same thing in Toronto and it just fuels speculation in the media and then the fan base. This speculation causes controversy and then the rest of the players have to spend the year trying to answer what the coach refuses to. When Paddock tries to be clever by denying the media the simplest of answers, the media then go and bother Daniel Alfredsson or Dany Heatley and ask them who's starting.
Just answer the question if you know the answer John. The media here in Ottawa are not prone to going after coaches so there's no reason to be afraid. If Martin Gerber is getting the start, then why is he being bothered with questions the day before a game that he's not allowed to answer? Ridiculous and completely needless.
On the Florida side, who the Sens will play tonight, goalie Tomas Vokoun skated on that twisted ankle yesterday but isn't sure he can play tonight.
There's still quite a buzz in the air over Nick Foligno's first NHL goal and his subsequent leap in the air as a tribute to his father Mike. On this front, the Sun definitely beats the Citizen because they actually got father Mike on the horn.
"I really thought the jump was great. You know, I thought it was nice that the Senators allowed him to do that. They are such a class organization because they respect the tradition. I really think whenever somebody scores in the NHL, that's the one time that you're allowed to be a kid again."
Nice job Bruce Garrioch.

Antoine Vermette will be out with back spasms so that means Brian McGrattan gets back into the lineup. According to the Citizen's Allen Panzeri, coach Paddock has already told the enforcer that he's going to be out of the lineup from time to time and even speculates that McGrattan may have trouble getting a contract for next year, not just from the Sens but from any team.
Let's hope GM Bryan Murray does the smart thing and keeps McGrattan around. For one, he's a top-tier scrapper, and two, he's enormously popular with his teammates. Those kinds of guys always are. Heatley even gave his All-Star jersey to McGrattan as a token of thanks for taking all those knuckles to the face for the team. You'll never convince me that a team doesn't need at least one guy like that. The fans love him and the players love him. Case closed.
Posted by Jeremy Milks at 7:35 AM